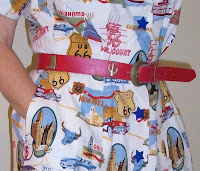 Thanks to Pattern ~ Scissors ~ Cloth for the great tutorial on a handworked thread loop.  I have been looking for a way to make an invisible loop for the belt on my Route 66 dress.  Since I didn't know what to do, each time I've worn it, I just get some red thread & tie it around to keep the extra belt flap from flapping (a great flapping picture to the left--it even casts a shadow!).  Which works okay, but I usually walk during lunch w/ co-workers, so I change clothes--and almost always break or lose the thread loop!

Yesterday, I was glad to read Sherry's blog and learn how to make a more permanent loop myself.  I can't say mine is as neat as Sherry's, but still, I think it looks great. I tried it on last night, so I know it works; I'll wear it to work tomorrow (a scorcher, 100F, so a dress--yes!).  I used the same length of thread Sherry recommended (about an arm's length), but DUH! I was doing a much bigger loop.  I ran out about 1/2 way thru the blanket-stitch.  But I cut off more thread & wove that in & that worked fine.  The belt rests right on my hips, so the loop doesn't have to bear the weight of the belt.  Thanks, Sherry!

BTW, this amazing pop song from 1982 came up on the roommate's shuffle yesterday:  Dislocation Dance - Rosemary.  I will never ever get tired of those horns!  Ever...
at 3:51 PM