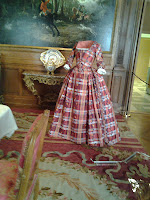 Have you ever folded & refolded a piece of paper so many times it becomes soft & pliable?  Or played with a piece of paper when bored and folded it into tiny squares one direction and then another, over and over?  And noticed that it has suddenly changed from a stiff printer-worthy sheet to being almost textile-like?  Well, that's what Isabelle de Borchgrave does. 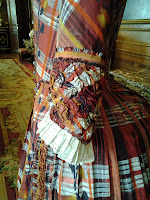 Her process is quite lengthy, but it begins with crumpled pieces of paper, she then paints the paper & re-crumples.  Then she paints the back & re-crumples and then the front with another color & some more re-crumpling.  If that sounds easy, I'm sure it's not.  She also studies fashion & design & dresses in museums & then creates 3D clothing using pattern pieces--but no sewing.  I'm guessing glue?!

Hillwood House is not especially interesting to us otherwise, I do have to admit; probably why we've never been there.  She was a collector (and I totally get that!), and it's fun to see how much she had & how it's displayed.  But for a house re-modeled in the late 1950s (one of my favorite architectural/furnishings time periods) it's rather Victorian...LOTS of stuff.  Carpets, bookcases, furniture, tables, little tables, paintings, gewgaws and lamps and candlesticks on tables and shelves full of stuff.  Mostly Russian stuff--Faberge, dinnerware, snuff boxes, etc. etc. etc.  Her husband was the ambassador in Moscow after the Revolution--the Russians had no regard for anything to do with the Romanov family (or anything from their palaces) and she bought loads of stuff and shipped it back home.  Perhaps I'm not interested because I'm just jealous!  I'd love to have loads of money & free shipping, but send me to India, Bolivia or West Africa, please! 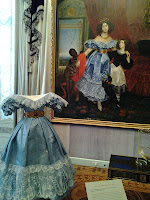 However, the exhibit is called Prêt-à-Papier and is just wonderful.  Highly recommended...it's there thru the end of December.  If you go to the artist's home page, you can book a tour of her new studio, useful if you'll be in Brussels anytime soon! 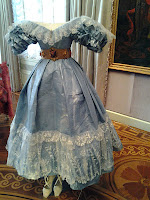 Here's a painting of Countess Samoilova, and the paper dress created based on the painting.  I was especially impressed with the lace...it looked very real unless you got too close.  In fact all the paper clothing looked so real that I began thinking that all the fabrics in the house (draperies, bedspreads) were paper, too!  And I had to keep reminding myself that the drapes draped beautifully because they were fabric--not paper!


Notice to the left that she also creates paper shoes!  I'll show more of those later in another post.  (I took loads of pictures--I love museums where they let you take photos as long as you don't use flash). 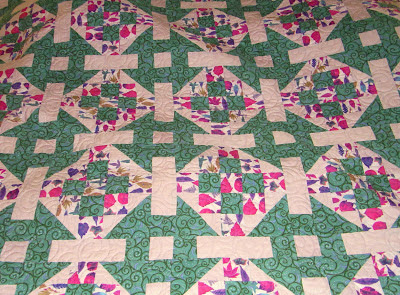 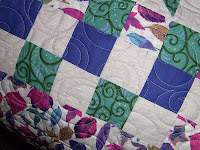 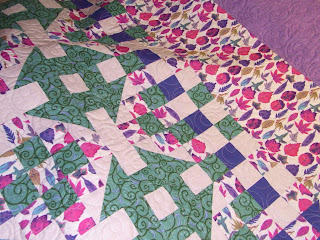 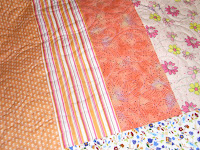 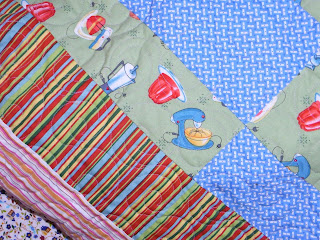 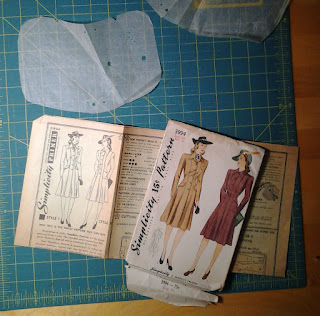 It's a little bit of a weird pattern...at first I was freaked out because I couldn't tell whether it had been used & I thought that the markings on the pattern pieces had faded because I couldn't see any...then I realized that it had been used (there are markings in pencil & some lovely old-fashioned writing) so the pieces are ready to go.  But there still aren't any markings (darts, grain lines, etc).  I don't know how the original owner figured out how what shape & size the pieces should be and I can't tell if the 5/8" seams have been added.

The instructions do say to add the 5/8" seam, so I'm guessing the previous owner did so.


The patterns have only one mark, which you can see in the photo to the left. (It's part of the pocket.) 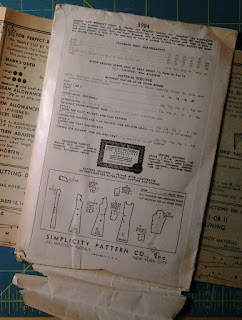 Finally, here's the back of the pattern.

I'm using an old sheet I got at the Salvation Army for the muslin...we'll see how it goes.  I still haven't decided what to do w/ my amazing double-sided fabric Marc Jacobs' wool from Mood: lined or unlined?  Reversible?  Is that even possible?  Or make contrasting cuffs & pockets to show the reverse?  I may have to head over the Allison @ Bits of Thread to help me with these decisions...

The Roommate Gets a New ゆかた (浴衣) 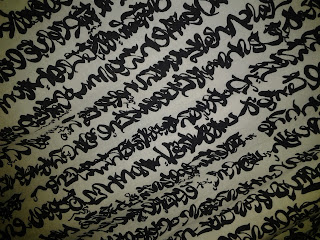 We lived in Japan from 1993-1994, teaching English at an eikaiwa (conversation school).  The Roommate got this yukata (cotton kimono) there and we both love it because of the writing and the graphic quality of that writing.  I have no idea what it says, but I love writing systems, and this satisfies on so many levels.

However, it's wearing out.  The seams are holding up, but the fabric is worn through in many places.  I have new fabric for another, but am dismantling this yukata so that I can re-use it as lining for the new one (at least the parts I can re-use...probably just the lower half.  I started dismantling (okay, seam-ripping!) and then began to wonder just how long it had been since I'd washed it.  So it's in the dryer right now...just to be sure I'm working with a clean version. 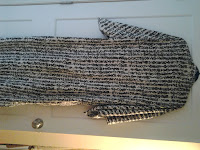 I dug out my Japanese kimono pattern book (see below), and have been using the proportions from that, along with measurements from the existing robe.  Japanese kimono use most of the fabric because the pattern pieces are essentially just rectangles; they're also fairly easy to make because there is not really fitting in terms of width, it's the length that has to be modified, depending on the wearer's height.  If you're at all interested in purchasing used kimono to re-use for fabric, it is a pretty good idea--you won't get a bunch of tiny pieces that you can't do much with.  Lots of rectangles, and the back is often one large piece, not 2 pieces sewn together.
I finished it!  I had lots of time (Hurricane Sandy means no work today or tomorrow), plus I couldn't go anywhere (not safe to be on the streets), and the Roommate was out of town (stuck in SFO & couldn't get a flight back), so it was a great time to work on a present that wasn't meant to be a surprise, but why not?  The situation definitely called for it.

See what you think...he picked out the fabric.  I wanted to use one of my West African wax prints (thinking "What a crazy mix--African batik & Japanese clothing!"), but he didn't like that idea.  It's an Alexander Henry print (I was going thru my scrap box & noticed his name was on a LOT of selvages!), that I got from an Etsy Shop, Lucky Frog (Lucky Kaeru).