And even more about Smocking...

I may be teaching a "how to smock" class at Bits of Thread in DC next spring, so I've begun doing all sorts of research on how smocking has been used throughout history (not that easy to find, unless you're talking tradition ("English") smocking.  I am focusing on Canadian or North American smocking.  Here's a fine example of it from one of Judi Dench's costumes from Shakespeare in Love...

Here are a few things I've made as samples, just to see what types of fabric work, and what types of patterns work on different materials. 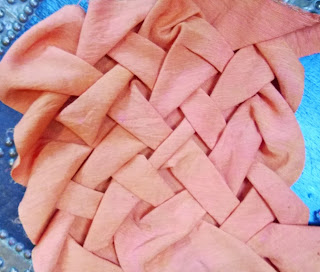 This first one is on a piece of Thai silk.  After smocking, I tried ironing a bit after smocking...just to see what would happen.  I'm not sure I like it, but if I ever wanted to do something with it, I could rinse it out & fluff it up.  I was going for the Judi Dench sleeves look, but don't have the patience. Notice I didn't add any pearls either! ;-) 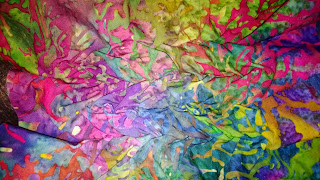 The front of a small piece of batik.  I tried this to show that the business of the print sort of takes away from the smocking (though it does look better in reality).  And here is the back, about 1/2-smocked, with the Pellon grid + my marks: 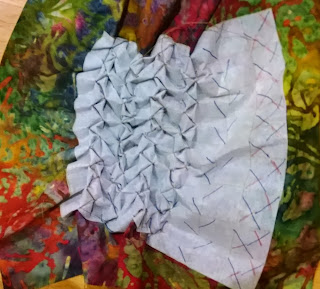 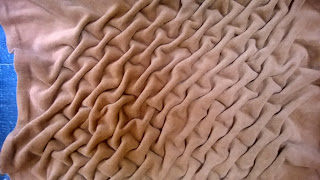 This is on a piece of cotton velvet.  I think it looks quite nice.  It makes the square into a parallelogram, and it would take a firm cushion & some work to re-square it.  But it looks a lot better pulled out into a square so the design shows. 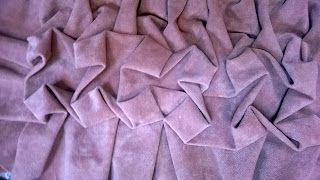 Fake suede, very slick & polyester-y.  I think if you were going to do something with the squares you'd have to fill them with batting as you stitched each one.  I've seen this recommendation for other smocking patterns, too. This is the back of the doubled 5mm silk I bought way too much of. You can see all my markings on it; all made with the iron-away Pilot Frixion pens.  Rubbing the lines, or a bit of warmth, removes them completely. 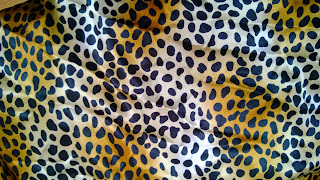 This very slick polyester hasn't been tamed into smocking yet.  First I tried ironing on the Pellon fusible grid interfacing, but it made this thin silky material way too stiff & weird looking.  Then I tried drawing a grid on the back with the Pilot pens, but really couldn't see what was happening, partly because of the print, but also because the silky material resists the pen.  I could probably use a Sharpie to draw the grid, but that would be pointless because if it shows through, that won't be pretty.

I may try ironing on the grid again, then washing it before I do the smocking.  Or washing it after I smock.  Either way, I want to find if the grid interfacing will soften up and the fabric will look like silk.  On the other hand, smocking really requires fabric with a bit of stiffness to it, so who knows--it may look awful no matter what!

I found a few more blogs with posts about Canadian/North American smocking.  First, Vani, who does lovely work, embroidery & yummy cooking, but here's one of her detailed posts about a trellis pattern with flowers that I found really helpful.  She is good about answering questions, too.

For some more lovely smocking used in haute couture, here's a post about Miu Miu from 2012.

Passion et Couture has a wonderful trellis pillow she made using printed cotton; it's just the right mix of print & fabric & technique!

Lovely curtains with smocking at the top from Maison de Pax!  This honeycomb pattern is simple but ever so effective, don't you think?

Finally, after quite a bit of research, I've found 1 book in 2 volumes by Debbie Shore which seem to focus on Canadian smocking, not English smocking (though she is English).  The publisher is Vive Books, and the title is Modern Smocking.  You can get a CD version, or a downloadable e-book, and there's a deal if you buy both volumes together.

If you look up Debbie Shore on YouTube, you'll find she's done quite a few tutorials, which will give you plenty of ideas for applications & techniques!