OK Kimono - and the fabric is Japanese women poets! 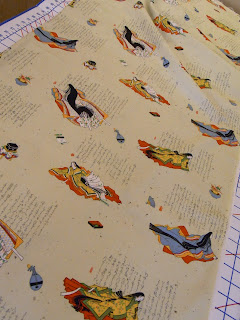 Last weekend I started my kimono, which I've been thinking about for a while.  I spent a lot of time translating the kimono pattern book, mostly just for fun, because I have a yukata & hapi coat that I can just look at if I like to see what pieces there are. 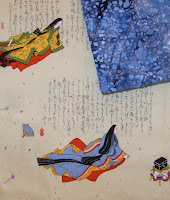 Then I needed to find some fabric so I went down to the basement & right on top, in the very first box I pulled out was a bunch of Japanese-themed fabric I got years ago in Abu Dhabi. I was mostly buying for quilts back then, so only had 2 yards of 42" wide fabric.  I think that might have been almost enough, if I'd been willing to have it fairly short.  However, the whole point of making this because I don't want to scare the neighbors...longer is better!  So I decided I needed a contrast color.  Looking at the fabric (which is a pale green, the picture doesn't really show that), all I could think of was a plain red or black, or maybe blue. And then, lower down in the same box, I found some lovely batik.  (I'm not so sure where I got that, though Abu Dhabi is a good guess, too, as fabric was cheap & plentiful there.  Also, we've been on the move pretty much since we left there in 2007, so I haven't been buying much--rather trying to get rid of stuff!) 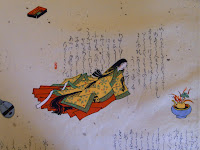 What I really love about this fabric is that it's Japanese women poets--all reclining while writing.  So, perfect for a house coat, huh?  I'll have to perfect my reclining.  I also like writing systems, and I know I probably bought it because of the writing on it--I can't resist that, and if you look at my old link about the kimono pattern book you'll notice that both my hapi and the Roommate's yukata have writing on them.  My Japanese is nowhere near good enough to figure out if these really do represent actual people.  Each drawing does have a chop (name stamp), so perhaps if I was more knowledgeable about the subject, I'd be able to figure out who they are. 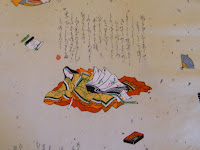 When I was doing the pattern translating, I discovered something I hadn't notice before.  First, a little information:  I hope you've been paying attention to recent posts about strip-weaving, because that's what the Japanese did too...traditional woven fabric is only about 14" wide.  Generally a kimono is 4 strips wide (that includes the sleeves, and it takes 12-13 yards of fabric for one kimono, depending on the sleeve length (the really elaborate long ones are for young women & girls).  Anyway, back to the pattern.  On many of them there was no shoulder seam!  They just used 2 very long strips for the front & back right side and the front & back left side.  So I went & checked & my hapi doesn't have a shoulder seam, but the yukata does. 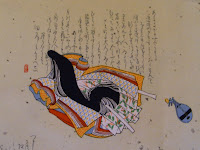 In case you want to check out some Japanese women poets, here are a few of the very famous ones (they must be if I know about them).  The first name is the woman who wrote the Tale of Genji, which might be the first novel, ever.


I got their Kanji names from the List of Japanese-language Poets on Wikipedia.
at 3:01 AM