From the Collection: Weaving Accoutrement, Part I

In addition to collecting textiles, we collect items used to make textiles (especially if they're wooden!).  I'll start off with items needed for weaving...drop spindles, shuttles & today, a back-strap loom and some loom pieces from Asia & Africa.

One reason we are drawn to such items is that besides being utilitarian, they are often beautifully decorated, too. They don't need to be carved in different shapes or have any decoration, but they do.  A great example is this loom (left) from Bobo Dioulasso, which has the hanging portion carved in the shape of a bird; I suspect this is from the Senoufo/Senufo people.  As a birder, I found a hornbill loom impossible to resist.

We're always amazed at how just a few bits of wood and string, if properly constructed can become a complicated loom.  We've seen them all over being used to make beautiful and intricate fabric.

In Africa the looms we saw weren't portable.  However, in Laos and Latin America you often see weavers using backstrap looms--all you need is a tree or fencepost and your loom is ready.

Here's a video of a man weaving in Cote d'Ivoire, on a loom much like this one. These looms are quite narrow (the resulting fabric is often about 6-7" wide, but some are even narrower).

So what do you do with a very long piece of fabric that's only 6" wide? In West Africa, after strip-weaving, they sew all the narrow strips together, to great effect.  I believe this first example, blue & green (above), is some Bondouko cloth.  We bought this and another piece in Abidjan.  It has an interesting strip woven effect, but is also embroidered--unusual on a strip woven piece.  Embroidery is common, but on another type of fabric:  that made with Adinkra, or stamps carved from gourds. In the video, the man is making plain white fabric--this is useful, too, especially for printing on with mud to make Bogolon or mudcloth (you'll have to wait to see our examples of that).

Left, above:  A strip we bought, basically just to show where Kente comes from.  These strips, however, are sold all over Ghana as souvenirs.  I can't imagine buying a strip, but not an actual piece of Kente; but that's just me.

Below are some examples of Kente & Ewe, from Ghana, where geometric design & strip weaving come together to create true masterpieces. This first one is cotton & rayon (I think).  Nowadays these items are worn for special occasions (we saw a few men in the villages wearing them, not often; perhaps they were officials, or on their way to a ceremony).  To give you an idea of how this cloth is worn, here is an amazing photo of three Fante women, two wearing Kente, the standing woman wearing an Adinkra print, taken in the late 1890s.   Strip weaving is a long process and requires a good eye and lots of work--these women were wearing their finest clothing, I suspect. 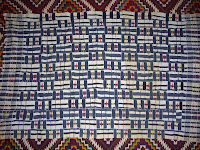 This blue & white fabric (left) is Ewe, also from Ghana.  The Ashante, who make Kente tend to use a wide variety of bright colors, while the Ewe tend to stick to indigo & white, with a healthy dose of primary colors to keep things interesting!  I am pretty sure we only saw Ewe made of cotton.

Finally, to the right is a silk Kente, which we bought in Tamale, in the north of Ghana.  Tamale is where you have to go if you want to get to Mole National Park; highly recommended.  It's also where I broke down in tears when I found a market selling used English-language paperbacks!  A story for another time--which would have been averted if Kindles or iPads were available then... 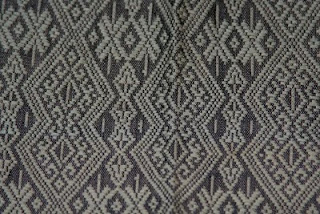 Remember I was talking about a simple-looking bit of wood & string put together to make a loom?  What comes off these looms is amazing.  Here's a piece we bought in northern Laos, at a "weaving village" mentioned in Lonely Planet.  We walked a few miles from where we were staying and found about 10-12 women using a variety of looms to create many different items.  We went for the largest piece they had, which you can see to the left.   (I have photos of that village, somewhere, but they'll have to be scanned in after I find them; this trip was in 2000.) 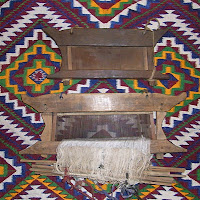 Back to the looms themselves:  reeds look much like a comb and are used to pack the weaving tightly.  (In the hornbill loom, above, the reed is the brown wooden part.)  Here are two combs from Laos.  The top is just the comb, while the bottom is the backstrap loom, complete with a bit of fabric and 4 heddles.  (Heddles are what makes the pattern.)  You'll probably notice the pleasing shape of these; all of these have been used as decoration in our various abodes because they are so lovely.

Here's a blog about backstrap weaving (an extremely portable loom).

If you're wondering, the carpet under these reeds is from Aswan in southern Egypt.  It's wool and another example of strip weaving, but with strips about 12" wide.  It's yet another masterpiece we've been lucky enough to come across (and afford).  More on carpets some other time.

I'd love your comments; are you bored stiff?  Should I go back to sewing?