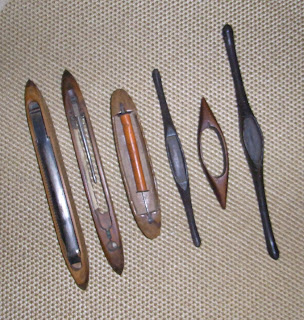 Shuttles!  What's a shuttle?!  A shuttle carries the thread being woven back & forth (much like the shuttle that carries me back & forth between work & the Metro station).  In this video from Laos, you can see the weaver swapping between different shuttles to change the color & create a pattern.  BTW, this was filmed near Luang Prabang, Laos, which is where we bought the fabric I showed on the previous post.  You'll notice that the reeds on the looms are much like the ones we have, too.  And look at these looms--they are just wood & string, but they make magic! 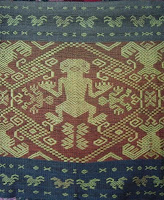 So back to shuttles--aren't they gorgeous?!  I love the different styles & shapes & the well-seasoned wood.  The two darkest shuttles are from Laos (again, they're featured in the video).  The two on the left are from the Czech Republic.

Remember in the previous post I wrote that a loom is just a contraption made of sticks and string?!  But the sophistication of this arrangement & the sophistication of the fabric that comes out of these looms never ceases to amaze me.  Here's a fine example of a shawl from Indonesia.  I suspect that's the monkey king featured in the design.

I do go on, don't I?!  Some more Ghanaian textiles to the right...we took this at a shop in Accra.  The wall is full of mostly Kente cloth, but also some Ewe cloth & plain woven items.  The Ewe and Kente tend to be strip-woven, but now they have wider looms in Ghana, too, so that explains the less intricate patterns.  I think we came home with seven Kente and 3 Ewe, plus quite a bit of other stuff, too, like masks and miniature coffins (see here for an explanation of why we needed a coffin model).  However, our motto is We should have bought more!
at 3:59 AM