Remember these photos from a few weeks back?

A week or so ago, I had high hopes that this See & Sew B5699 jacket was going to be fairly easy.  I had made a toile, was headed off to see Allison at Bits of Thread, and thought I'd have a nice  pattern all ready to cut out by the time I got home that night.  I was so wrong.


A bunch of problems presented themselves.  Allison did not agree with me that the fit was almost there.  I ended up cutting & re-cutting 2 more toile versions, trying to a) get the fullness out of the waist, and b) trying to get rid of the floppy collar.

I again (foolishly) thought I was close when I left class that night... 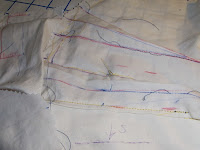 But a full week of modifying, darting, & re-darting every night hasn't got me any closer (as these photos illustrate).  I moved darts, added darts, re-sized darts, and did everything I could think of and still...I don't think it looks correct.

In fact, the latest version of the toile looks too small. But I don't really know because I lost the back pieces (which did fit perfectly), so don't have anything to sew the front pieces to! However, just pinning it to Helen it sure looks too small.  So how did that happen?

I had to put it all away for a while & start a quick knitting project! But what I've done is dig out the pattern pieces for the Starlet Suit (from Gertie).  That finally fit me, as you can see here.  However, those are princess seams, and I was hoping to get a jacket with a different pattern (why I bought See & Sew B5699 to begin with).

I find these extreme fitting challenges to be extremely upsetting.  First, I wonder if my body is totally weird; why does one part of a pattern go easily and the other is so painful? And sewing does make you look at yourself pretty closely (and measure yourself), and I don't like doing that at all.

There does seem to be a bit of hope:  Gertie recommended this FBA tutorial page, from Sew L.A., and I've followed the instructions to the letter.  More on the test version of that jacket (in cotton) next time!