The New Domesticity?! A step back for women? 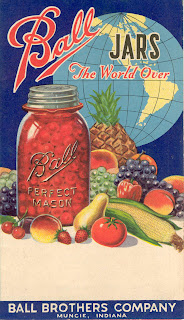 This article was in the Washington Post last week, and the subtitle is Fun, Empowering, or a Step Back for American Women?

First, I'm not sure why it's a step back only for American women; are the women in other countries so backwards they can't step back?  But whatever, it's interesting that any traditional work calls to mind the good old days, when women were downtrodden & men were men.  But I tend to think that any knowledge that makes us self sufficient is only that--knowledge.  Knowledge you can gain from your grandmother, or a book, but it's useful stuff to have in your head.  And if you enjoy doing it, why not?  Why analyze?  I say just enjoy & be glad you get something useful at the end of it.

I tend to think I have a little different perspective on women's rights as I lived in Japan, Oman & the UAE for 11 years...in all three countries, women are well-educated, but have varying degrees of freedom & choices.  And I live in the US, where there's a scary drive to put women back into the 19th century by taking away abortion rights and even birth control choices.  I'm not complaining about the opportunities and choices & the fact that I'm paid a fair wage similar to my male counterparts, but I also know that whenever men (or women) start telling other women what they can do with their bodies, choices start disappearing quickly.

I knit, sew, make kim-chee by hand and do lots of cooking.  However, I do not do the laundry by hand, or clean my carpets by taking them outside and beating them--I've got a vacuum.  I don't walk the 7 miles to work; I use the metro.  I'll do whatever I can to make chores easier & faster; but for the "chores" I enjoy (is knitting & sewing a chore?), I don't mind doing them the old-fashioned way.

We do make our own yogurt--mostly because I want to know what's in it. However, I don't do it the way I did in Taiwan--over a gas pilot light on the stove--instead we have a little plug-in device.  Same for the kim-chee: I want to put my cool stuff in it (chiles, caraway seeds, lemon slices), and would never buy any in the store.  I never dream of pumping my own water (like my grandmother did) and the few times I've had to heat water to wash in (while camping or if the power is out), I think of my grandma to gain strength, but am glad it's a one-off.