Those Darned Darts! or The Saga Continues 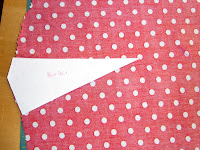 This looks to be a never-ending project!  Hope you're either a) learning something or b) amused by all this.

So where am I now?  I used the original pattern & drew the darts onto my now new piece of muslin (it's that special kind of red & white muslin!), pinned the darts, put it on Helen.  It looked okay, so I sewed up the darts; and re-fitted it to Helen & it didn't look so good...

I took out the darts & tried again--essentially I moved them out about 1/2".  Pinned, put on Helen.  Looked okay. Sewed them up, put on Helen--did NOT look okay.

If you're wondering what that white triangle is in the photo, it's a dart that I just keep moving around to trace onto the pattern.  I figure it's a normal size person bust-dart, so once I get the angle correct it will be the right size & shape.  It probably doesn't show in the photo too well, but I just pinned the neck & the side seams to the dressmaker's friend and marked the fullest part of the bust.  Then I laid my paper dart and pointed that right at the fullest part.  Then I drew on the darts.  I will sew them up later; I have to go pick up the car which is getting new tires for the (supposedly bitter) winter that's got started last weekend. 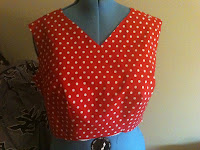 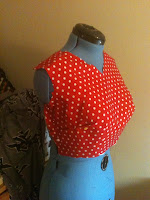 I think I've adjusted & re-adjusted about 8 times now!  I do feel I'm getting close.  I finally put in the waist darts, trying to make them a bit wider so they made the waist fit better.  Then I went back to the upper darts, trying to get them the right width at the side seams & at the right angle.

I'm really hoping this pays off in me being able to use it over & over...if not, I'll be pretty upset to put in all this work!  Or maybe it's character building?!

I didn't need to gain respect for pattern designers, but boy, is this difficult.  I'll have to pay more attention at they gym when I watch snippets of Fashion Project Runway.  I have to go to work tomorrow, & we're going to NYC this weekend, so I was hoping to get it done today...not sure whether I'll get back to it before next week.  But at least I feel like I might actually figure it out at this point.