Yukata! - In which I decide I need a dress form... 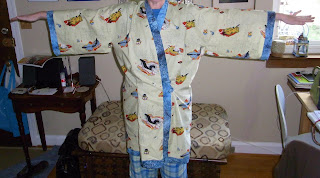 So, I finished it.  Again, I need to reiterate how pleased I am about how well the batik (blue) goes w/ the Japanese poet print.  You can see from the photo at right how messy my house is...NO! you can see that it is really a boxy Japanese kimono pattern, modified a bit to hopefully be a bit more flattering.  However, there is so much bulk under the arms, at the side seams.  I do like the final result & will wear it a lot (it's so loose that I can wear my pajamas underneath it easily)...but, I may try to think of a way to take in the side seams to reduce some of said bulk.

I need to mention though, that kimono are not meant to be shaped, the pieces are rectangles made to efficiently use the narrow woven fabric.  When we lived in Japan, one of my students was studying tea ceremony (the Japanese make everything an art & it always involves lots of study & practice)...and she had to wear a kimono.  She told me that her kimono hated her!  This student, Akiko, was a normal female shape, but she said that when you wear kimono, you have to have no shape.  "Like the trunk of a tree," was how Akiko put it!  Which surprised me, but if you think about it, she's correct (look at some photos from Kyoto, if you need more evidence).  Which again brings me to the question of why I thought I would get a shapely housecoat if I copied a kimono pattern?  Oh well...it was a fun project.

A reminder, a yukata is a kimono, but made from cotton, not silk or wool.  It's a summer kimono, essentially.  If you've ever spent a summer in hot, muggy, Japan, you know why they invented this version of the kimono! 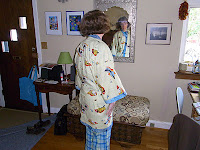 Here's the back--you can see I added some darts in the back to give it some shape.  I also added them in the front, but they don't show much because of the overlap.

I had to look at the Roommate's yukata to figure out how to do the underarms.  Attaching the sleeves was easy enough--just lots of straight line sewing, but after sewing up that little flap at the bottom of the sleeve, there's actually a gap in the fabric.  I top-stitched that to make it lay smooth & look nice. 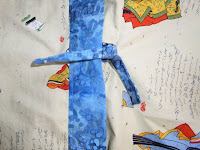 I tried it on w/ my hapi coat belt, but the Roommate & I didn't think it looked very good, so I decided to make tie fasteners.  There are 4 of them, and I'm also quite pleased with them--I made them by folding the fabric 4 times and sewing a few times--so they are rather sturdy & flat--and I think they make nice little knots.  2 are inside, where they don't show, so that the overlap stays put.

One thing I kept coming up against over & over was how to fix it while it was on me.  The Roommate is extremely helpful & willing to do most anything w/ regards to textiles & sewing, but he doesn't always "get" what I'm talking about.  I really feel like a tailor's dummy, or dress form, or adjustable mannequin is the next item I want for my sewing room.  I may have to wait a while--we have to pay for our new south wing, first! The duct tape version is looking better and better!

Another issue...of course I don't have any matching pajamas!  Uh oh.  I do have some great stretchy fabric that sort of matches, maybe I'll make some pants out of that.
at 9:51 AM