Country Music Clothing, or These Boots Are Made For Walkin' 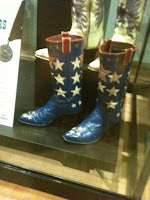 The Roommate & I met my parents in Nashville, TN for the weekend.  It was great; there is so much to do, plenty of live music and sites to see.  3 days was good, 5 would have been better.  If we'd had more time, we'd spend more time on Broadway on Fri & Sat nites seeing live music.  It was great, though; we had a super time.  It was also nice to see the sun (and lots of it) as this past month has been g r e y here in the DC area.

A disclaimer about the photos--of course these treasures are behind glass and aren't that easy to photograph.  I appreciate your patience.


I had never thought about all the amazing stage clothing the performers wear. But you get in a museum where they're all together & you start thinking...Wow!  Let's get started with footwear...stay tuned for clothing.

First, at the top--Dale Evans' boots!  Roy Roger's are shown behind hers.

And some blue suede shoes--those would be Carl Perkins'.  Though I heard him talk about writing that song on Letterman once, and he said that he saw a guy at a dance get made at his very pretty girlfriend because she stepped on his blue suede shoes.  Perkins said it gave him a great idea for a song--but he would never have said anything to the girl--she was a very pretty lady.  So I suspect these were his, but were purchased after the song was a hit...

Jim Reeves' (my dad's favorite) shoes & gold cufflinks!  Here's Four Walls to give you an idea of his amazing voice...

The following 4 pairs are from the Williams family...Hank Williams, that is.  The first were Hank's himself.  Let's start off with Hey, Good Lookin' , is that my favorite?  I can't decide.  Considering Hank died in 1953, I was surprised to find any old TV clips on youtube.  And take a good look at that suit--it ws on display in the Country Music Hall of Fame (where most of these pics were taken), too and I got a pic.  I was thrilled to see him wearing it in this video.  Here's another great song, with June Carter singing backup & Roy Acuff taking a verse on I Saw the Light.

The next blue & white pair of boots are Hank Williams, Jr.'s when he was a little boy.  That kid started performing when he was 4!

This next pair belonged to Audrey, Hank's wife.  The amount of work that must have gone into any of these is amazing.

Finally, the last pair were Hank Williams, Jr.'s, too, but when he was grown up.  He's still performing, too (and he's not 4 anymore).  But who is? 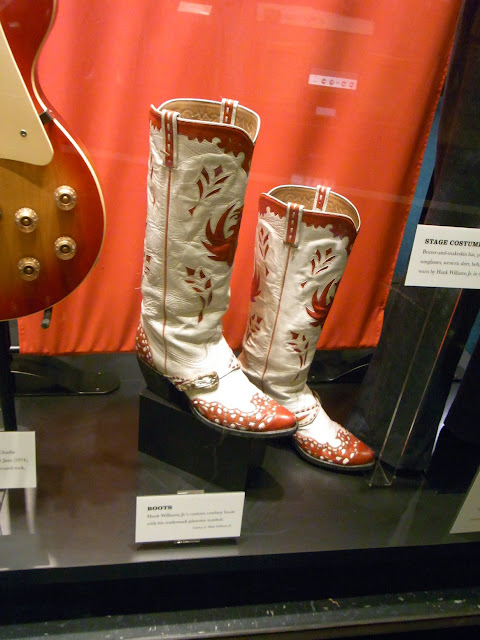 Hope you enjoyed these.  I don't think of myself as needing great stage clothes to have good music, but at the museum, you really see how much a part of the culture these clothes are...and have been for a long long time.
at 5:36 PM